The map below shows the North half of present-day Lyon County, KS. The double line is the Kansas Turnpike; n-s thru Admire is Hwy 99. The dotted line angling across the top is the route of the Santa Fe Trail, ca. 1821-1870. 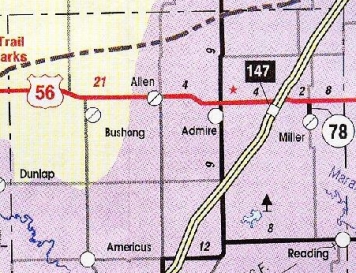 Initially only two stations were planned in Lyon County on the Ottawa, Osage City and Council Grove Railroad, at what became Admire and Bushong in 1886.  The eastern half of northern Lyon County was in Waterloo Township.  The idea of a new railroad was opposed by so many in the western part of Waterloo that when a bond issue came up they obtained a division of the township, which was split into Ivy and Waterloo townships.

Promoting the railroad bonds were the city’s town fathers, three businessmen from Osage City and one from Emporia.  They were given the right to acquire land for a town site and station, and to name the town.  The site they chose was in Ivy Township, where the residents had opposed the railroad so much that they split from Waterloo.

When the time came for naming the new town, local legend says that the founding fathers drew straws and the winner was lawyer and former state legislator Jacob V. Admire, who was at the time owner and editor of the Osage City Free Press.  Mr. Admire never lived in the town named for him, as he chose at the time to continue publishing his newspaper in Osage City, and moved elsewhere a few years later.

There was occasional speculation about how the town name should be pronounced, and the early townspeople stuck with the version of the editor’s surname, AD-mire, making a joke that there was much to Ad-MIRE in AD-mire.

Like the other newly-established railroad towns in northern Lyon County, Admire flourished until the next year.  In 1887 when the town was only a year old hot winds blew, streams went dry, cattle and hogs became almost worthless and severe drought put an end to Admire’s dreams of booming growth. 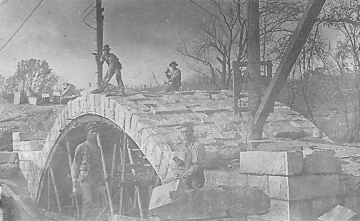 The road that comprises the south boundary of Admire was for many years a primary route for travel through the area, and a bridge was needed over the creek 1/2 mile west of town. Construction of the limestone bridge started with a wooden framework arched over Hill Creek.  Rock from a nearby farm was worked by stonemasons who cut the limestone blocks by hand to fit.  In the spring when the arch was complete and the crew was ready to remove the wood supports, big rains caused the creek to swell with a swift current that washed the support lumber downstream.  The one-lane bridge is still in use since it was built in 1917 and 1918, and remains a local landmark.

Admire had two doctors, but eventually only Dr. Hatcher remained with his medical practice and dental work. It was reported that when he was extracting teeth he tucked his long whiskers under his collar because patients in pain sometimes grabbed and pulled on them. He kept all of the pulled teeth in bottles displayed in his office, and served “refreshments” in the back room. Children who were patients received a piece of rock candy. 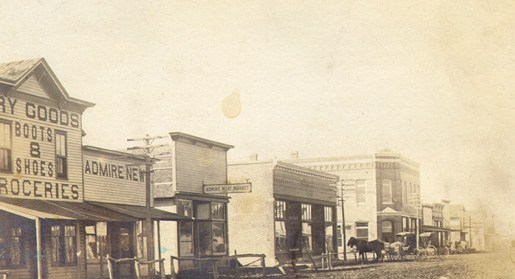 Admire, circa 1900.  View from east end, of businesses on the south side: Admire News, Admire Meat Market, Cooperative Store (dry goods), bank with Admire Opera House on 2nd floor, and others.

A large cottonwood tree still surviving sits at the northeast corner of the main intersection of downtown Admire (5th & Main), where blacksmith John Burns formerly had his shop.  In 1904 Burns used stakes and mesh wire to erect a protective fence around the little cottonwood sapling.  He wanted it to grow, and had noticed ranch hands tying their horses to it.  After it was fenced, Burns hung a sign on it that said, “Boys, please tie your horses to the hitchrack.”  When he explained it to a local woman, she named it the John Burns Cottonwood Tree.

In 1936, after some hard economic years of the Great Depression and of poor weather for farming, the local merchants in Admire were carrying a lot of credit for their customers.  They decided to pool their money to buy a new car, then give the customers a ticket with each purchase, and with any payment on their old debts. 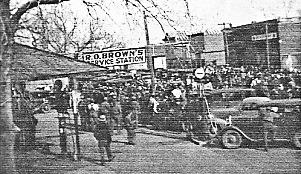 The merchants bought a new 60-hp Ford V8 Tudor sedan valued at $653, put it on display in Larkin’s feed store for about 60 days, and started giving out tickets.  On March 28, the day of the drawing, one of the biggest crowds ever seen in Admire had gathered as pictured, filling the whole intersection in the middle of town.  The tickets were stirred in a big drum, and a young boy reached in to pick the winning number.  Hazel Hiefner, a farmwife living northeast of town, won the car.  Her husband took the car to Emporia the next day and received much-needed cash for it.  The people of the community were pleased that the Hiefner family had won the prize.

K-99 highway was constructed at Admire with an underpass down beneath the railroad bridge.  Soil was removed down to the road level, and the sides of the cut were reinforced with cement.  The top of this cement abutment stuck up above ground level on either side of the railroad track.  In June of 1948 Admire was the site of a spectacular train wreck when an eastbound freight train went through at 60 m.p.h., and the tenth car derailed as it reached the highway bridge. It struck the cement abutment beside the rails and started a chain reaction of 47 cars being thrown to either side, end over end, across the bridge, down onto the highway, and back along the track until the last cars slowed enough to stop without derailing. Most of the cars were refrigerated (using 300-lb. blocks of ice) and carried fresh produce. The wreck was strewn with green beans, carrots, cabbages, cherries, onions, Idaho potatoes and frozen turkeys, while broken tank cars spilled coconut oil and lumber from six flat cars was thrown about like matchsticks.  Many of the cars had the wheel units sheared off as they struck the bridge. One body was discovered in the wreckage, a hobo who had hitched a ride.  Hot weather added to the cleanup misery, as the broken cars fell apart when lifted by a crane, and finally a bulldozer was able to clear the track so that it could be repaired.

Admire had two early-day churches, Methodist Episcopal and Methodist Protestant.  When they later merged, the MP building was moved to the grade school and used for a gymnasium, pictured below; it burned in 1924.  The M.E. church shown below is still in active use; also shown are church ladies in 1922. 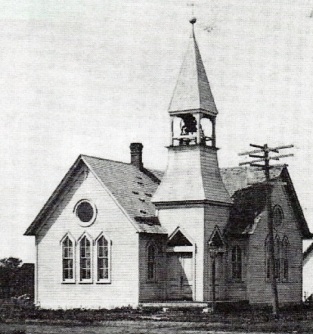 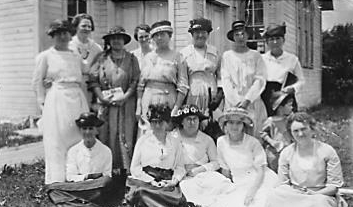 When the town of Admire was started in 1886, a one-room school was already in use, across from the platted town site at what is now the NE corner of Hwy 99 and South Street.  Admire residents soon erected a larger two-story wood-frame schoolhouse on the present site at 3rd and Main.  Classes were offered for elementary (1st through 8th grades) and for two years of high school. 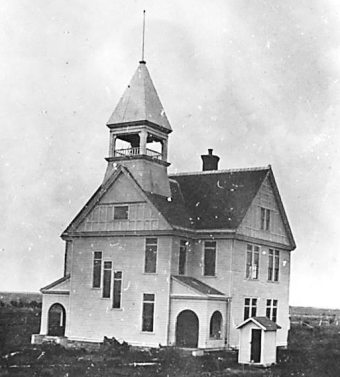 The school burned in January 1924, and while the present brick structure was under construction, students met in make-shift classrooms elsewhere in town.  One of these was a two-story business building with a makeshift classroom on the ground floor, and a family lived above on the second floor.  Once in awhile the lady upstairs would decide to mop her floor, and as the dirty mop water made its way through the floorboards, it dripped on the kids below.

Admire School after the January 1924 fire.

Admire Rural High School had its first graduating class of one student in 1912 while the wood-frame school was in use.  The new brick building served as both elementary and high school from 1925 until Northern Heights High School consolidated the four high schools in north Lyon County in 1957.  The building continued in use as a consolidated elementary school until it was closed in 2010.  The building currently serves as the Admire Community Center, and houses the North Lyon County Museum.

Admire Rural High School and Elementary Built in 1925, open for classes in Jan. 1926

As the area populations changed and student enrollments dropped, the town schools went through a series of consolidations, as follows:

In the early 1900’s a race track was made around the school house.  Residents enjoyed both running and harness horse races. Two merry-go-rounds were placed at each end of town with the railroad tracks between. Horse tricks and races, hypnotizing, competitions (such as sack races), oration, dances and a hot air balloon were some of the features of early fairs.